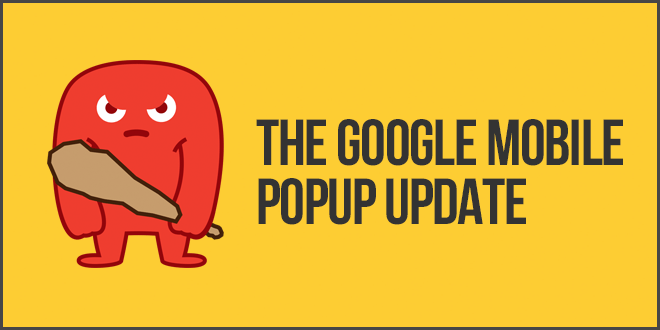 Given 1.4 billion smartphones were sold in 2015, it’s hardly surprising that 70% of internet use now comes via mobile devices.

And with so much content viewed on phones, you can’t afford to ignore Google’s latest update.

After all, from January 2017, pages that have popups on mobile may rank lower because of those popups.

This is in line with what we’ve been seeing in the last few years from Google, taking mobile seriously with the Mobilegeddon update, the Google Index Divide, and more.

Let’s get into what’s going on with these changes:

What is an intrusive interstitial?

In a nutshell, any popup that covers the main content is considered an “intrusive insertial.”

Google is mainly focussing on 3 types:

Here are some examples directly from the post on Webmaster Central: 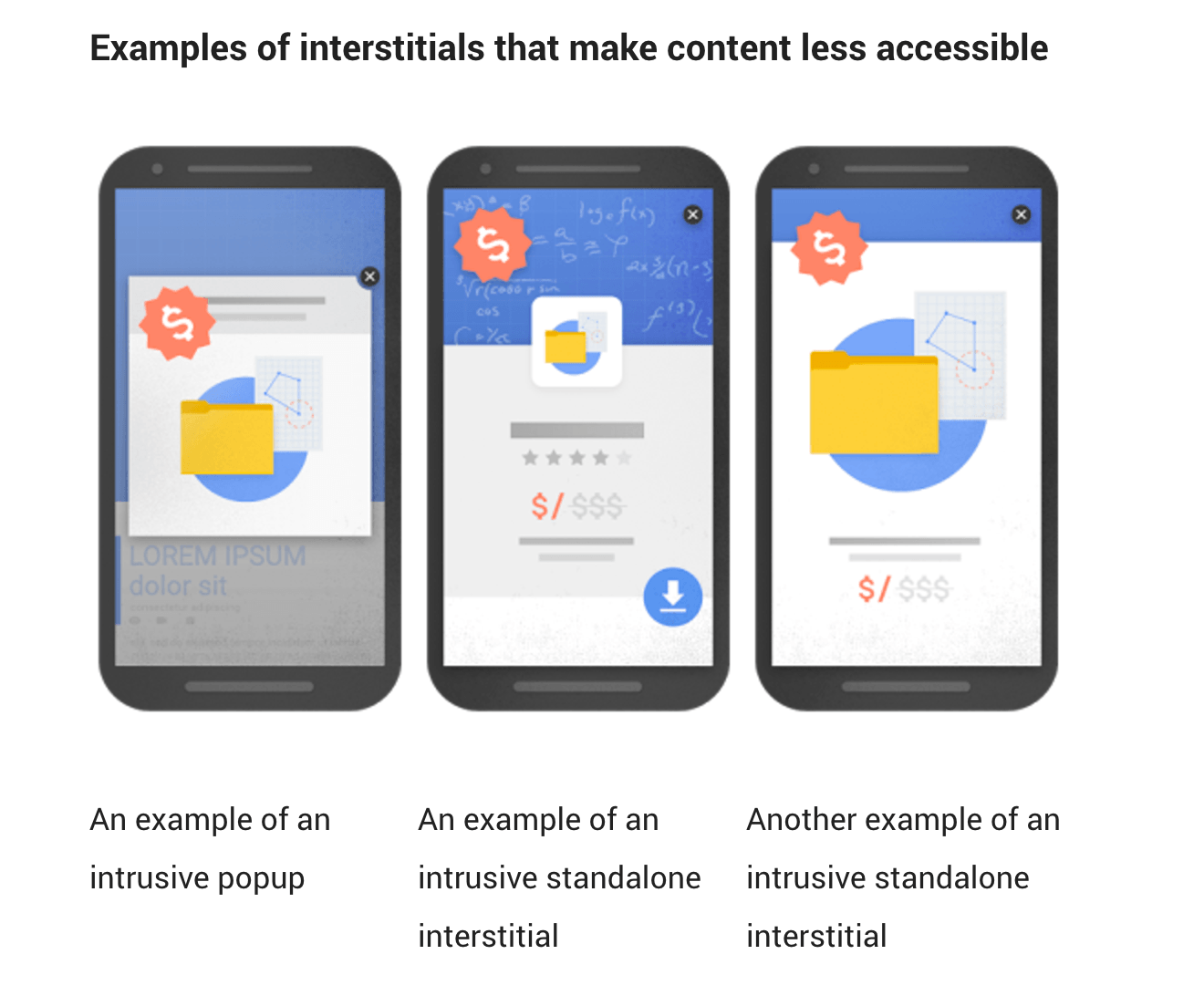 Google has included a few exceptions: Popups for legal reasons, verifying ages or notifying users about cookies, will still be allowed.

But if you use any of the interstitials that aren’t exempt, then you might be tempted to panic.

Even Google ask that you don’t worry just yet. They explain that “intent of the search query is still a very strong signal, so a page may still rank highly if it has great, relevant content”.

Making sure your content is valuable and worth reading is still a really important way toget pageviews.

Why is Google doing this?

Part of Google’s mission is to prioritize good content in its search results. They want users to get the best results possible so that they continue to use Google as a search engine.

They’ve tried to put users at the heart of their algorithms for some time.

But now that 85% of sites are mobile-friendly, Google has had to find a new way to prioritize the best content.

That’s particularly true in the mobile space. In October, Google even announced that in future, their mobile index will be more up to date than their desktop index.

So, what’s the issue with popups?

One of the problems with popups is the fact that Google can still read and index the content of the page. Except the visitor can’t read it as soon as they arrive because there’s an interstitial in the way.

While most popups have a ‘No thanks’ option, or an X to exit them, they’re still a barrier to the content. They can be annoying on a desktop computer, but even more so on a small mobile screen.

You don’t want to try to touch a tiny ‘x’ only to find you’ve clicked on an ad, or loaded a video that might eat up your mobile data.

So from January 10 2017, Google will not rank pages as highly if a visitor can’t easily access the content.

What do you need to know if you use popups for your email list?

If you use popups to gain subscribers, then you’ll want to try and keep using them in some way.

After all, one test even showed that a popup was a massive 1,375% more effective than a signup form in the sidebar!

You can always try the ‘two step pop-up’.

Simply add a call-to-action in your post. Only the visitors who click on your CTA will see the popup. The two-step opt-in can increase opt-ins by 60%.

If you still want to use your usual popup, then make sure there’s a setting that allows you to turn popups off on mobile devices. That way you still target desktop users, but don’t fall foul of Google’s change.

Some popup providers offer an alternative, in the form of the scroll box. The box only appears once the reader has read a certain percentage of the content, by which point they’re more likely to subscribe because they like what they’ve read. Plus, they don’t obscure the whole page as soon as the visitor lands on it – and that’s what Google is primarily looking at.

We suggest making sure you nix any mobile popups before January 2017 to prevent any rankings loss.

Keeping signup forms on the site in the post footer or throughout the content will be the best way to make sure you keep getting subscribers from mobile devices.

We won’t know how serious this update will be until it actually rolls out and we will keep you up to date, as always with any new Google updates.