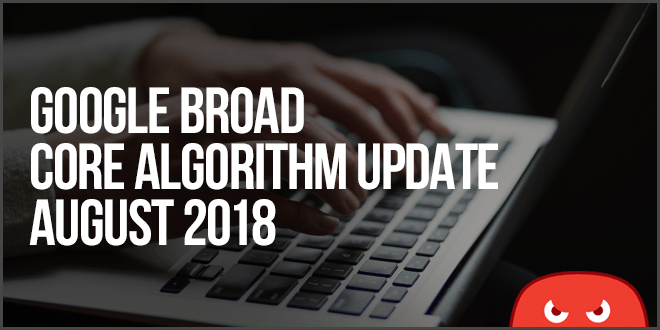 Updated August 29thth, 2018
Note: Check out this guide to learn how to fix your website if it was impacted by Medic.

Google announced the release of a broad core algorithm update on August 1, 2018.

These algorithm updates get released and announced several times per year, though there are other updates that may not always get announced. Here’s everything we know about this most recent update so far:

This week we released a broad core algorithm update, as we do several times per year. Our guidance about such updates remains the same as in March, as we covered here: https://t.co/uPlEdSLHoX

The natural questions that SEOs are asking now are: “What changed?” and “What should I adjust?”

When pressed for details regarding what webmasters should do to avoid negative effects from the update, Sullivan suggested reading Google’s Quality Raters Guidelines.

Want to do better with a broad change? Have great content. Yeah, the same boring answer. But if you want a better idea of what we consider great content, read our raters guidelines. That's like almost 200 pages of things to consider: https://t.co/pO3AHxFVrV

This reflects the same statement made by Google for their March and April broad core algorithm updates:

Each day, Google usually releases one or more changes designed to improve our results. Some are focused around specific improvements. Some are broad changes. Last week, we released a broad core algorithm update. We do these routinely several times per year.

As with any update, some sites may note drops or gains. There’s nothing wrong with pages that may now perform less well. Instead, it’s that changes to our systems are benefiting pages that were previously under-rewarded.

There’s no “fix” for pages that may perform less well other than to remain focused on building great content. Over time, it may be that your content may rise relative to other pages.

In other words, Since this is a “broad” update, there isn’t anything specifically targeted that SEO’s should adjust. A broad core algorithm update like this is a refinement by Google intended to improve the search results for better quality in general.

The bottom line about this update is: Check your rankings to see whether or not they were affected. There is no specific “fix” if your website was negatively impacted, rather, you can try to improve your content according to Google’s guidelines.

We always wait to collect data before giving advice. Be wary of changing anything rapidly as sometimes updates take days or weeks to roll out.

That being said, here are some observations that have been reported by SEO expert Marie Haynes about this update:

2. That being said, it does indeed seem to be a big update, not impacting all sites but having a large effect on the sites that were impacted.

Apparently, many large chains with multiple locations across the country have dropped in rankings in favor of smaller, locally based businesses.

3. Since both organic results and local results (map listings) seem to have been affected, this indicates a change to both of the organic and local ranking algorithms.

4. YMYL pages (“your money or your life”) seem to have been affected. These are web pages dispensing medical or financial advice. Google wants to make sure it’s only ranking pages written by experts so that no one gets harmful advice.

Here is the section detailing how the algorithm trearts YMYL pages from Google’s Quality Raters Guidelines. Notice how the emphasis is on pages that “potentially impact the future happiness, health, financial stability, or safety of users.”

“Trust-worthy” pages are referred to as EAT pages (experience-authority-trust) and indicate the quality of the page to Google. So YMYL sites in niches like diet, nutrition and medical device have reported being impacted more highly by the update.

Here Are Some Observations You Reported to Us

In our form below, we asked what changes you may have noticed. Let’s see if they line up with the other effects being reported as this update continues to roll out.

Who saw an increase in their traffic/rankings?

One user reported, “Big big jumps in rankings” for their eCommerce store selling vape juice. The SEO activity they were engaged in was toxic link disavows while focusing heavily on their blog content.

This user saw their rankings jump up and down quite a bit. Saying, “We do work on OffPage SEO with different channels and could see instant up and down results for targeted keywords on SERP with-in a day or two.”

While other websites filled out our form from a variety of niches including law and supplements, not all of them filled out the form with their observations (they just left their URL). We think those sites went down in their rankings, but can’t be sure without the users’ description.

Who saw a decrease in traffic/rankings? (Hint: Mostly sites with medical-related content.)

This site that had been mainly doing On-page SEO reported, “Nearly half of my keywords on page 2 are now on page 3. Also noticed a 40% drop in traffic.”

Other sites in this niche saw drops, as well. This one reported, “Major drop in rankings and Google traffic halved. I know Google says it is about relevance, but my content is good and very much liked by my readers.” This user also observed, “The sites replacing my site are the big authority and e-commerce sites and big magazine type sites.”

Rather than relevance, the factor seems to be the entity putting out the article. Google may be looking for content geared toward health to be written by health and medical professionals. Or if not that, then content about health written by authority websites rather than niche ones.

This site recommends medical devices, which falls under the YMYL type websites that have been hit by this algorithm. So the reported effects for this user line up with the general reports that are coming out.

This user reported a “30% drop” in their rankings even though the only SEO they’re doing is organic content (no SEO tricks). This is another example that lines up with the YMYL type sites that reported drops.

Another user managing a site that dispensed nutritional advice for treating disease saw a massive hit. They reported, “My website has dropped from 15k visitors daily to 8k.”

They were doing nothing too crazy, just content creation and some backlinks here and there making this another confirmation that Google doesn’t want just anybody giving health advice.

Another blog reported, “Many rankings dropping massively. A few went back up, but generally, it has a strong down-trend. I lost a third of traffic.”

There seems to be a trend with these reports, doesn’t there? Note that the 2 previous examples of health and nutrition blogs that got hit were in 2 different languages, and this one is in a 3rd language still. So the topic of the site seems to be the factor.

An eCommerce site supplying home medical equipment for the elderly and disabled reported, “Massive drops on every search query. Other websites which we have never seen before are outranking us.”

One thing these anecdotal examples help confirm is that some of the sites noticing the biggest impact are in the medical niche. If they don’t meet Google’s Quality Raters Guidelines for a certain reason, there is a good chance they were hit.

What should you do to avoid being hit by this broad core update?

Based on the reports we’ve gotten, it sounds like if your site deals with medical or nutrition-focused content, there is a good chance it will have been hit by this update.

It seems like the algorithm is favoring authority sites or actual experts, but in general, those experts are often writing on behalf of those same authority sites.

So what should you do to make sure the impacts are lessened as much as possible?

You may not like the answer, but since this is a broad update, you should continue following SEO best practices as much as you can.

If your website was hit by the Medic update, check out this guide to learn how to fix it.