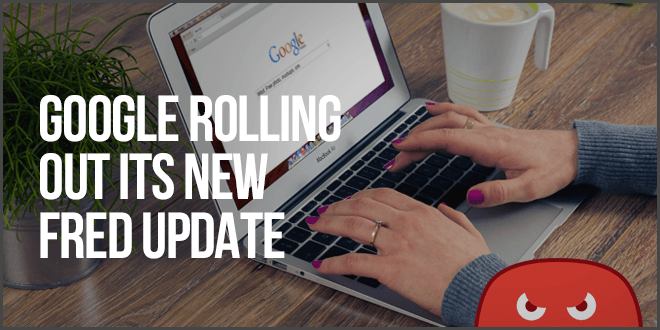 The name “Fred” originates from a tongue-in-cheek tweet by Google Webmaster Trends Analyst Gary Illyes. Though this Fred won’t haunt you in your dreams, it has turned out to be quite a nightmare for many sites.

Google didn’t initially announce an update to its algorithm. However, Illyes finally confirmed the update during a March 23rd AMA with Google session, more than two weeks after its launch.

If you want to learn more about Fred, keep reading. This article will fill you in on everything you need to know about the newest Google update!

What Sites Did the New Google Update Impact the Most?

Anytime we hear rumblings of a new Google update, we all start to wonder if and how it will affect our SEO strategies.

So did Fred impact your site?

Prior to Fred, the most recent confirmed Google update, also referred to as the Mobile Popup Update, launched on January 10th.

This update, however, isn’t focused on mobile browsing. Rather, Google is back to its usual business of brushing away low-quality content.

Because Google didn’t release an official list of changes from Fred, SEO experts had to do some research of their own.

The vast majority of websites hit hardest by the latest Google update seem to share one or more of the following characteristics:

Though not every site affected by the update shares these characteristics, almost all do.

Notice a trend? Most of the sites hit by Fred tend to place greater emphasis on ranking high and generating revenue than providing original, engaging content.

Therefore, this aspect of the newest Google update should come as no surprise to most webmasters and SEOs alike.

However, there is more to the story. Some speculate that Fred may have specifically cracked down on private blog networks (PBNs). Much of the conversation surrounding Fred has shifted towards link building.

It seems that Google may have targeted PBNs that were more general, or not niche relevant.

Though many websites clearly took a beating from Fred, other sites claim to be experiencing significant growth in organic searches.

It would stand to reason that if Google seeks to punish offenders, then it would reward those who prioritize valuable content.

How to Recover if Fred Hurt Your Ranking

Since the release of the update, some sites have reported significant recovery in their rankings.

How did they claim to do it? The answer: removed their ads.

This may be the quickest way to recover. However, removing all ads is an unrealistic proposal for most websites. The fact is that if Fred affected your rankings, then you must address several issues on your site.

Thus far, the steps to recovery from Fred seem to be as follows:

Any other steps, at this point, would be a sign of panic. The truth is that there is still a lot to learn about the specifics of this update.

Much of what is floating around on the internet is pure speculation and conjecture. The best thing to do right now is review Google’s guidelines and use valid information to fix any apparent issues.

In the end, Google is not in the business of punishing webmasters and SEOs. Rather, its main priority is to provide valuable content to visitors of sites.

Despite the reaction to Fred, the latest Google update is far from controversial. Everything featured in the latest update remains consistent with Google’s Webmaster Guidelines.

Google isn’t taking any massive leaps with its latest update.

Nearly every Google update proves to be further indication that tech giant will continue to crack down on websites that provide little value to their visitors.

Additionally, link building seems as if it will become tougher, particularly for those who utilize PBNs.

Web sites that fail to adapt to these new changes will pay the heavy price of reduced traffic. If you want to have a successful website, then you must aim to get page views the right way and avoid using questionable revenue generation techniques.