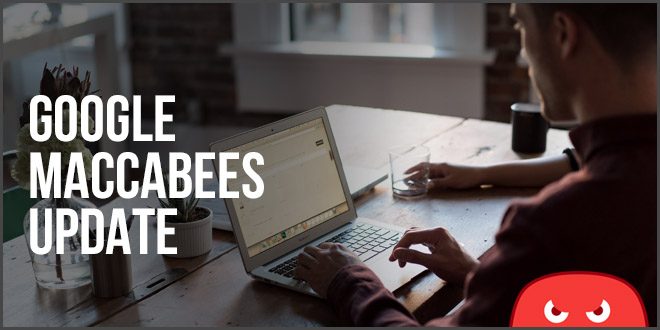 Google Maccabees Update: The Top Analyses and Theories on the Latest Google Update

On the second week of December 2017, right around the Hanukkah holiday, webmasters were hit with an unwelcome surprise—a Google algorithm change that threw rank and traffic drops to a large number of sites—a change that was soon named the Maccabees update.

Understandably, SEOs the world over took to Webmaster World by storm to report the huge hits that their sites took, along with their confusion. Even digital marketing giants Neil Patel and Eric Siu noticed some of their sites were hit during the same period. And yet, even with surveys done to analyze the affected sites, nobody could pinpoint exactly what these updates were about and what type of practices or sites set the penalties off.

On December 20, Google confirmed the update with Search Engine Land. But the nebulous quote from its representative didn’t help: “We released several minor improvements during this timeframe, part of our regular and routine efforts to improve relevancy.”

Months later, still nobody knows what the heck went down, and are grasping at straws, as evidenced by this Quora thread.

That said, there have been no lack of theories and reports offered to help shed light on this matter, and below, we’ve gathered the ones that made the rounds.

But first, let’s start with a few of the peculiarities with this update, beyond just the usual drop in rankings for blackhat sites.

Even “official” celebrity websites tumbled down the ranks

One example is John Lennon’s official website that, according to Gabe, tumbled to the #9 spot for the query “John Lennon.” 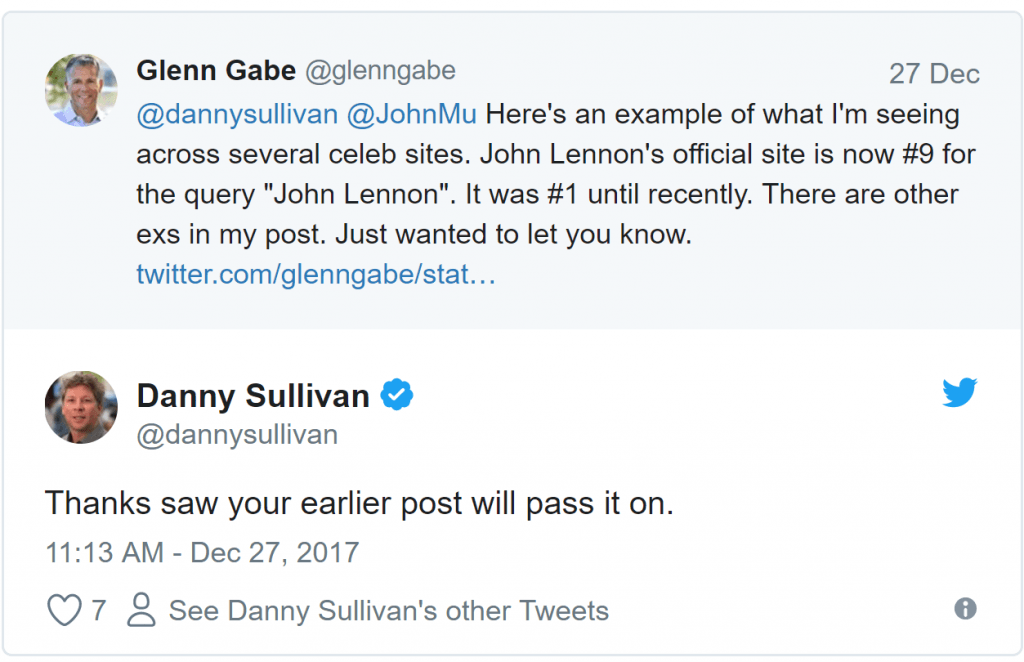 He has since reached out to Google’s Danny Sullivan to give a heads up, and Danny responded, saying he will “pass it on.” But to date, there has been no clear comment from Google about this.

Knowledge graphs are more detailed and visual results that show up in the right panel of the traditional SERPs.

This was followed by several more commenters who reported having had the same issue.

It was a big deal. All of those who were allegedly affected have said that they’ve had those branded terms knowledge graphs for years. And after the December update, they were gone.

According to one poster, even authority sites were hit by this update, so whatever the reasons for the disappearing knowledge graphs were, it must have had nothing to do with site authority.

As is the case with any update, Google keeps a tight lip on the rationale behind their updates, which has resulted in many different proposed theories, which we’ll discuss below.

1. Having too many keyword permutations

Perhaps the most widely accepted theory as to this update is the one by Search Engine Roundtable’s Barry Schwartz.

According to his analysis, the bulk of sites that were hit by the Maccabees update were those that targeted a myriad of keyword permutations or patterns.

Take for example a travel site, which will try to create several landing pages to rank for variations of their services or activities.

Of his 100 or so sample size of respondents, almost all who reported having gotten hit by the update had engaged in internal link building of this nature.

2. Having too many ads (Fred Extension Theory)

You probably remember the Google Fred update. It was a rollout meant to penalize sites that overuse ad content at the expense of user experience and value to the reader.

In an analysis post by Matt Diggity of Diggity Marketing, he cited two affiliate-heavy sites, 10 Beasts and Supplement Police, as two of the most well-known examples of e-commerce sites that used to rank for a ton of affiliate keywords and were hit hard by this update.

He’ll dig deeper as to what else these sites had in common, only to unearth two troubling discoveries that deserve each of their own sections in this list.

One of the less mentioned theories about Maccabees (it was not covered on SERoundtable or Moz at least,) is Matt Diggity’s theory that it had to do with .edu scholarship links.

Now when Matt did his own survey, he already established that most of the sites affected were affiliate sites.

But when he dug a little deeper about exactly what common points these affected affiliate sites had, he found that 40% of them used .edu scholarship links. 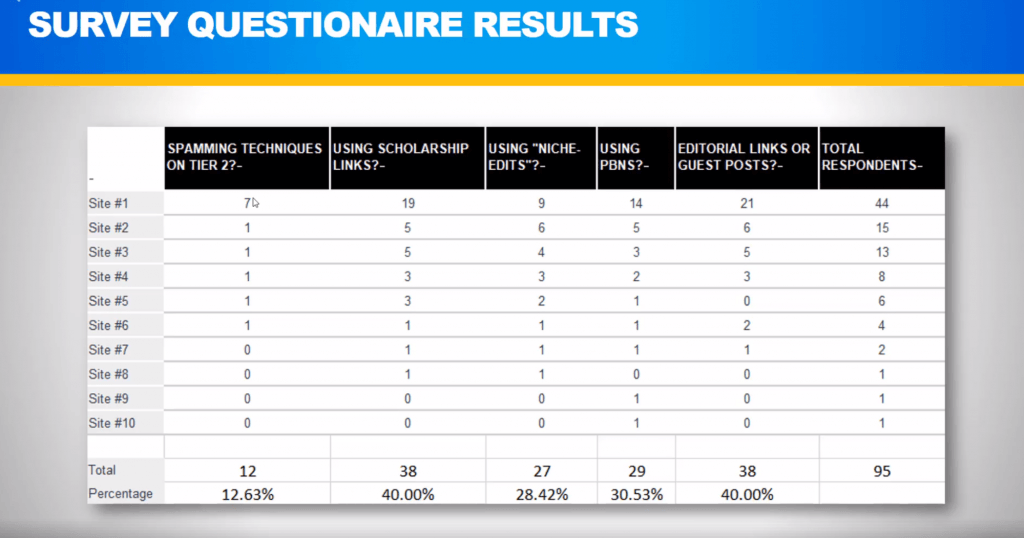 Scholarship links are backlinks from .edu sites. These are usually acquired by launching a scholarship program, then looking for official education partners who then post on their websites about the scholarship with a juicy .edu link to the sponsors.

On the surface, they looked like they’re doing good by offering a scholarship for students. Underneath, it’s an investment to get strong, authoritative link juice from a .edu site.

And it seems, if Matt’s data is representative of this update, then Google has caught on.

But what made him doubly sure that it was .edu links?

Apparently, Matt reached out to the previous owner of 10beasts.com, Luqman Khan, who, since the update, returned to help the new owner get the penalized site back up the SERPs. In 5 days, Luqman was able to get 10 Beasts back to number one. And when Matt asked how he did it, Luqman revealed the culprit: .edu scholarship links, thus corroborating Matt’s suspicion.

After disavowing and asking the universities to remove the backlinks, the site was able to get back its previous position.

4. Not having Mobile-first and Schema.org compliance

Search Engine Land did their own survey to get to the bottom of the matter by interviewing those with access to more than your regular amount of website data: people at the helm of SEO companies.

According to lya Onskul, Product Owner of SEMrush Sensor, their product “spotted the highest SERP volatility on mobile (slightly less on desktop) across most categories.”

As to which industries suffered the most spikes, though, there is no definite answer, as SEMrush’s Sensor showed spikes in various industries in separate turns. The only commonality? This volatility was all related to mobile.

Founder and CTO of Searchmetrics Marcus Tober also noted that their engine found that “Many sites have lost visibility that have no Schema.org integration.”

Still, both experts concluded their analyses with disclaimers that, as there is not enough time to to properly observe the results of these updates, they still can’t make certain conclusions about it.

Moz also took a crack at the Google Maccabees update puzzle, and came up with their own theory.

According to the writer, Dominic Woodman, he had access to an undisclosed (but large) number of sites.

After doing some of his own research, he found that all of his penalized sites had suffered from content cannibalization. That is, the websites that were hit had more than one page written about the same topic or keyword, and most of these surplus articles were barely getting any traffic or engagement at all.

Dominic responded by no-indexing the lower-value surplus pages and combining those that worked into a single article. He then implemented Schema.org as well.

Google Penguin was a Google update launched to catch sites that manipulated their Google rank by buying backlinks in bulk or using link networks.

Now according to threads in SEO forums such as Black Hat World and WebmasterWorld, a new wave of sites that have been using black hat link building methods such as link spam, unnatural and Private Blog Networks (PBNs) link building have all but disappeared from the SERPs.

These are telltale signs of another mass manual action penalty that had Penguin smeared all over it.

On the other hand, sites that have invested time in following Google’s requirements such as implementing schema to their pages have started to climb the ranks.

What should you do if you’ve been hit by a new algorithm update?

This is one of the strangest updates where basically there seems to be very little consensus of what caused it.

It’s easy to start jumping to conclusions on what cause it – it was this or that – but it’s up to you to test different things and see what works for you.

If you’ve been working long and hard at keeping a client’s site (or sites) up in the SERPs, and you suddenly get a steep drop for no obvious reason you can think of, the typical reaction is to panic. But panicking and making tons of changes immediately can do more harm than good.

Don’t do anything drastic. Wait, observe, audit, and test cautiously.

The best course of action is always to wait it out, observe the industry, and audit your site to make sure you have nothing that could be causing the penalty.

Google has become less and less forthcoming with the exact nature of the algorithm updates they make. So the bigger your network and data pool, the better your chances are at pinpointing commonalities that could serve as guiding factors to help penalized sites get back up again.

Another step to take would be to diversify your traffic sources. There’s no reason to just be a 1 channel marketer.

Take steps to strengthen other sources of traffic such as email, social, and even paid. That way, even if you take a hit, your other channels will keep your business alive.

The same goes for your link building techniques. If your whole traffic depends on a single backlink strategy, and Google launches a crackdown targeting that particular strategy, then your site/sites are toast.

Google has become less transparent with their updates. Unlike before where there were clear-cut guidelines as to what to and what not to do, more recently, SEOs have been left groping in the dark—more so than before.

In the case of Google Maccabees, most of the theories and analyses are anecdotal, some even contradictory. Some of the ones we’ve found had some empirical data, but the sample size is limited, ranging from as few as around 50 to a hundred or so, while in some cases, undisclosed.

So take everything with a grain of salt. And before jumping to make any drastic changes, test them out in smaller increments.

Finally, what may be true for a ton of other sites might not be true for yours, as evidenced in all the contradictory comments from SEOs in various forums. So test prudently, believe only what you see first hand, and replicate only what works for you.

Got any data that you think we should take a look at? Exchange notes with us in the comments section below.