Penguin 3 was supposed to blow up SEO, and today I’m going to give you the low down on exactly what happened, what was affected, and how you can stay safe going forward.

I waited a few days before releasing this because I wanted to see what actually was happening before I jumped on the bandwagon of spewing any kind viral info. Now that it’s been ~6 days, I think it’s a good time to let this out.

Let’s get into it…

Penguin 3.0 started happening this past weekend before Google confirmed anything. This was supposed to be a dreaded, extremely harsh update but it turned out to be not so bad.

It almost seemed like someone at Google accidentally hit a button and released it early – Even some head honchos over at Googleplex had contradicting statements about what’s going on with the update:

“There was some confusion if the Penguin refresh was done rolling out or not. SEOs were wondering why not all sites were impacted yet, they felt the roll out was halted or not complete. But yesterday Google’s John Mueller felt it was complete but then retracted that a few hours later. Pierre Far this morning said the roll out is not complete and will likely last for a “few weeks.”

Good thing we have a strong network of SEOs that can see updates even before Google confirms.

What Happens When An Update Comes Out

Whenever an update comes out, I just ping my SEO homies who I know are doing real SEO, and are tracking hundreds of sites. I actively avoid forum chatter.

SEO communities tend to just seed misinformation – One person says one thing, then everyone starts repeating it. So I don’t listen to any of that. I just go right to the source, the real people who have real data.

So what actually happened with Penguin 3.0

From what I’m seeing (and the general consensus of my trusted arsenal of SEO ninjas)… not much!

There didn’t seem to be much out of the ordinary – Some sites up, some sites the same, some down, without much of a correlation except with what we already knew: Avoid over-optimization.

We have sites in the tracker that use all kinds of different link practices including personal PBNs, Social profiles, Local citations, and more, and there hasn’t been a correlation in ranking drops for any of them.

In fact, there have been widespread reports of sites GAINING rankings that were waiting on a Penguin update (the last one was about a year ago). Sites that were hit and de-optimized their profiles / disavowed problematic links saw increases in serps. 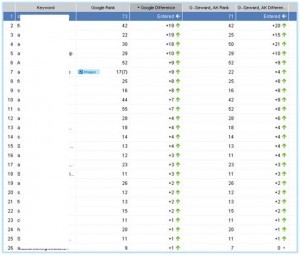 What a Penguin recovery looks like in the beginning

What To Do If You’ve Been Hit

There will always be some sites that get hit for one reason or another. This is a difficult update to pinpoint as well because the PBN deindexing happened recently and Penguin is supposedly a slow roll out, meaning that there are confounding factors and it’s not all happening at once.

Even so, if you’ve been hit, you can follow our Penguin recovery guide here, including Penguin case studies.

So, what are you seeing? Did you survive? Have you been hit? Let us know in the comments or submit a ticket with our support department!