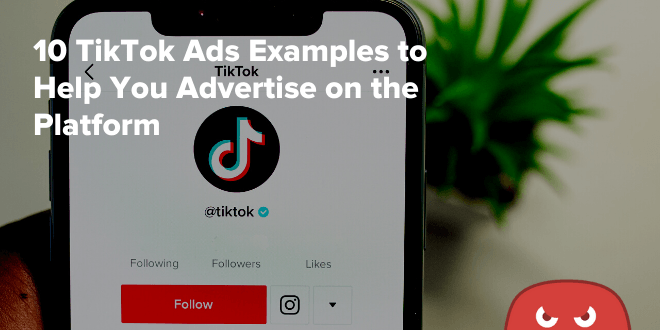 10 TikTok Ads Examples to Help You Advertise on the Platform

TikTok smashed through 1 billion users in 2021 — just five years after its founding in 2016.

It may not have as many active users as dominant social media and advertising platforms like Facebook and Twitter yet, but such fast growth implies that it’s quickly becoming an important place for brands to start advertising.

That said, TikTok has several ad types. To succeed on TikTok, it helps to understand how each one works and see a few successful ads.

In this article, we’ll explain the types of ads TikTok lets you create on the platform, then go over a couple of examples of each one to inspire your own.

What Are TikTok Ads?

TikTok is a video-sharing app that lets users make short-form videos up to 10 minutes long. It originally launched with 15 seconds as a maximum length but extended that limit several times until it eventually reached 10 minutes.

Naturally, it can be a potent marketing channel. In fact, the average monthly time spent on TikTok in 2021 was 19.6 hours. That’s equivalent to almost 40 minutes per day, every single day.

Thus, users are tuned in to their feeds. As a result, brands can take advantage of these high engagement levels with TikTok ads.

But contrary to popular belief, TikTok’s user base has a wide age range. Your target audience need not be young people to succeed. Here’s the age range breakdown as of September 2021: 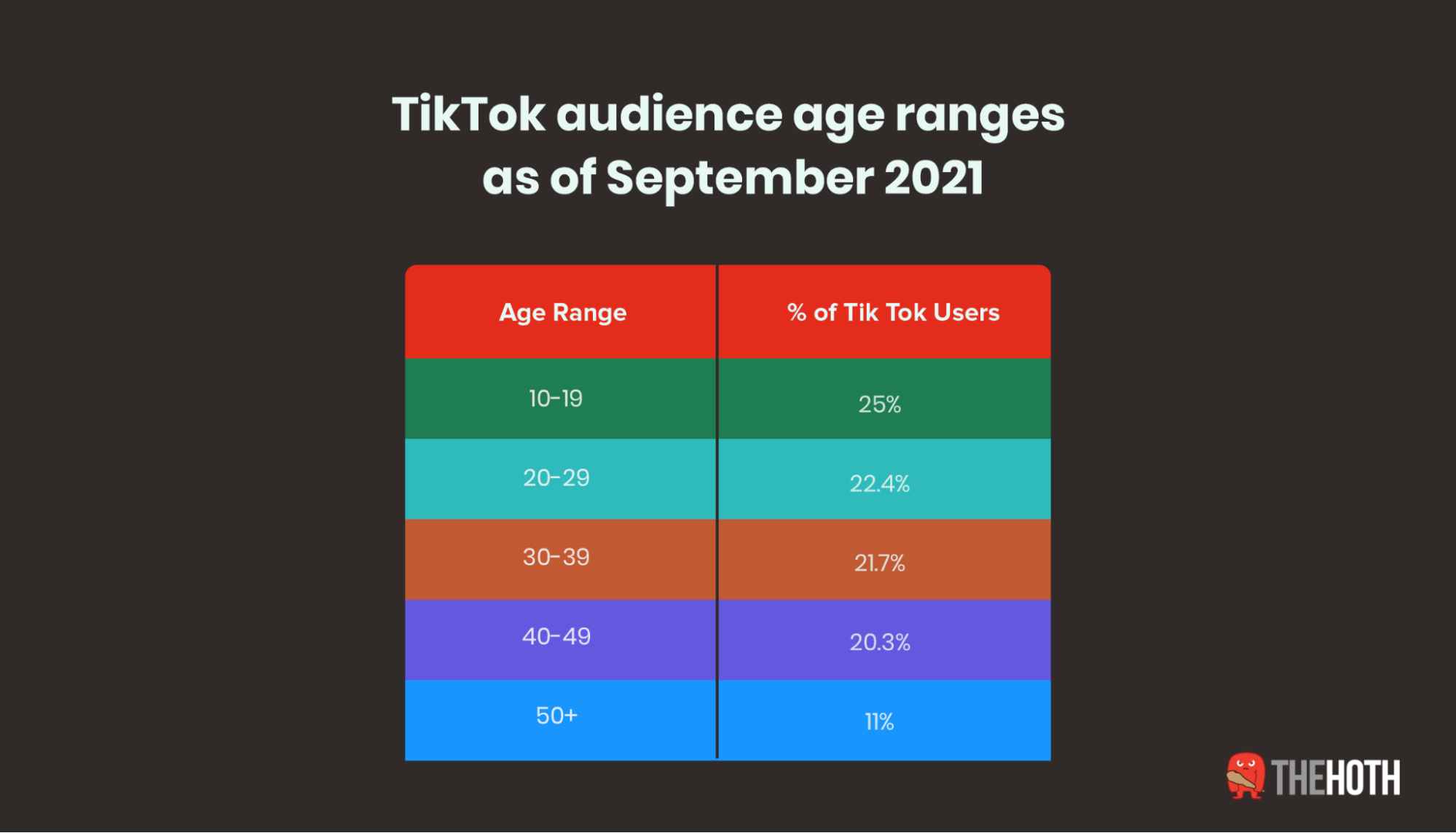 That said, an ad that appeals to the 10-19 age range may not appeal to the 40-49, and vice-versa. Knowing your audience is vital.

TikTok offers plenty of benefits to those who master its ad formats:

The 5 Types of TikTok Ads

Here are brief explanations of each TikTok ad type: 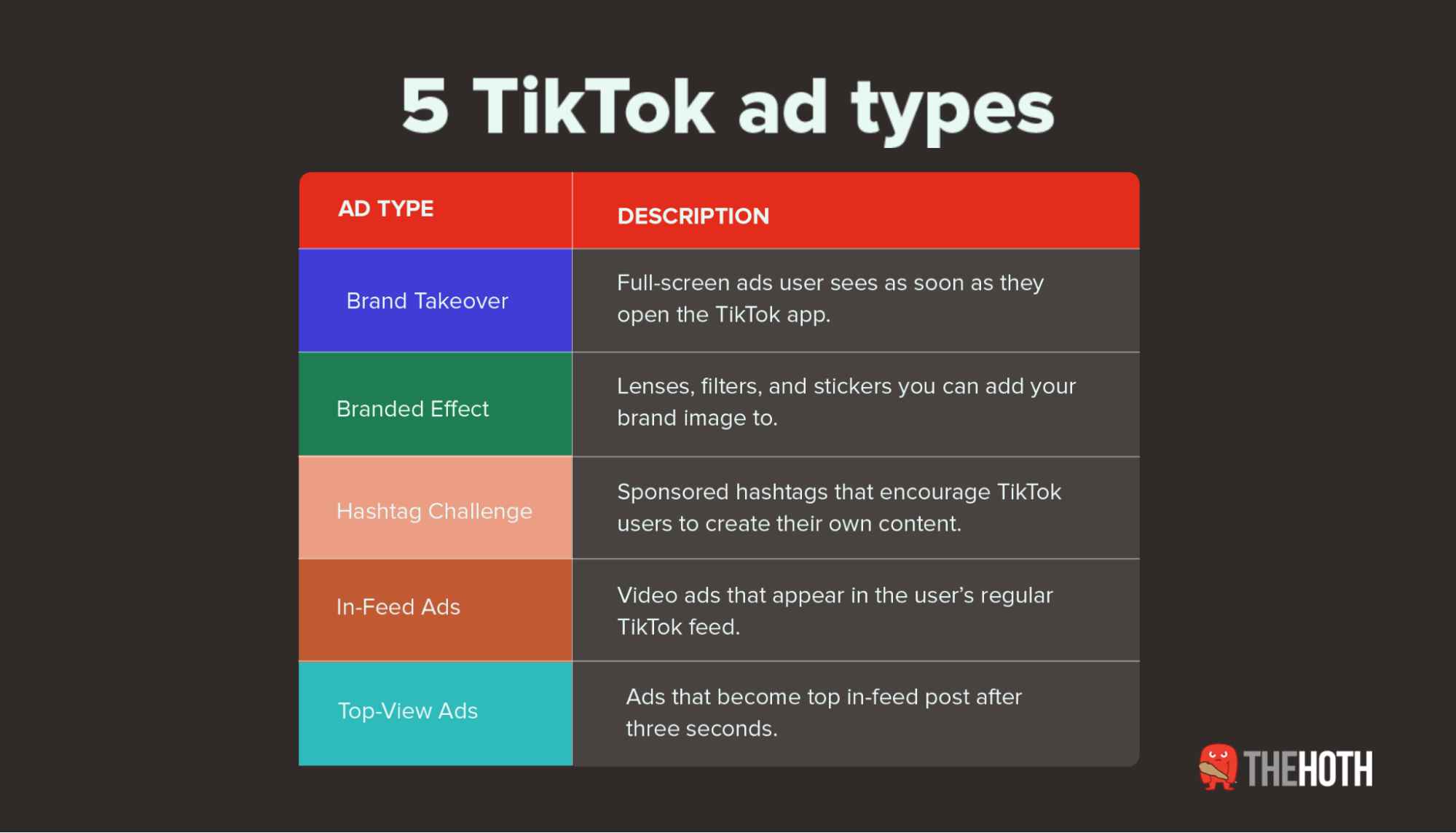 Brand takeovers are short ads that appear right away the moment a user opens the app. They start by taking up the whole screen for 3-5 seconds upon launching the TikTok app, then turn into in-feed ads.

Since brand takeovers are full-screen video ads, it can maximize brand awareness. Plus, the entire ad is clickable, reducing friction and maximizing traffic to your landing page.

Branded effects allow brands to create custom filters, sticks, and lenses based on their branding.

This gets the user involved. They get to have fun and exercise some creativity while spreading your brand name far across the platform and increasing video views.

These can last for up to 10 days, giving users plenty of time to create their own videos using your branded effects.

Branded hashtag challenges also get the user involved. You create a hashtag associated with your brand, then create a “challenge” for users to perform, such as some activity involving your product.

Users can click on your branded hashtag and land on a page filled with other users’ TikTok content within the challenge.

Branded hashtag challenges are a great way to get customers to do your marketing. You get plenty of user-generated content, helping you market your products with videos.

TikTok in-feed ads are types of video ads that show up directly in a user’s newsfeed. They look like regular TikTok content, automatically playing as users scroll through their newsfeed and run into them.

As a result, in-feed ads blend in well with the rest of the organic videos on a user’s newsfeed, making the user more likely to give your ad a watch.

TikTok allows these ads to be up to 60 seconds long, but they suggest keeping them 9-15 seconds in length.

TopView ads are similar to brand takeovers in that they’re the first thing a user sees. However, they don’t take up the full screen — instead, they take the top spot in a user’s feed after 3 seconds of the user logging in.

These ads can be 60 seconds long, giving you some flexibility in your messaging.

Since these ads snag the top of the user’s newsfeed, they’re less likely to scroll past it accidentally, helping you capture more traffic. In fact, according to a TikTok study, 71% of users said TopView ads grabbed their attention.

10 TikTok Ad Examples To Inspire Your Own

Now that you understand TikTok’s advertising potential and the available ad formats let’s look at some great examples of TikTok ads in the wild.

Below, we’ll cover two of each TikTok ad type. That way, you’ll have some inspiration regardless of which format fits your goals best.

Brand takeovers take over the user’s app for a few seconds. They can afford to look more like an ad. 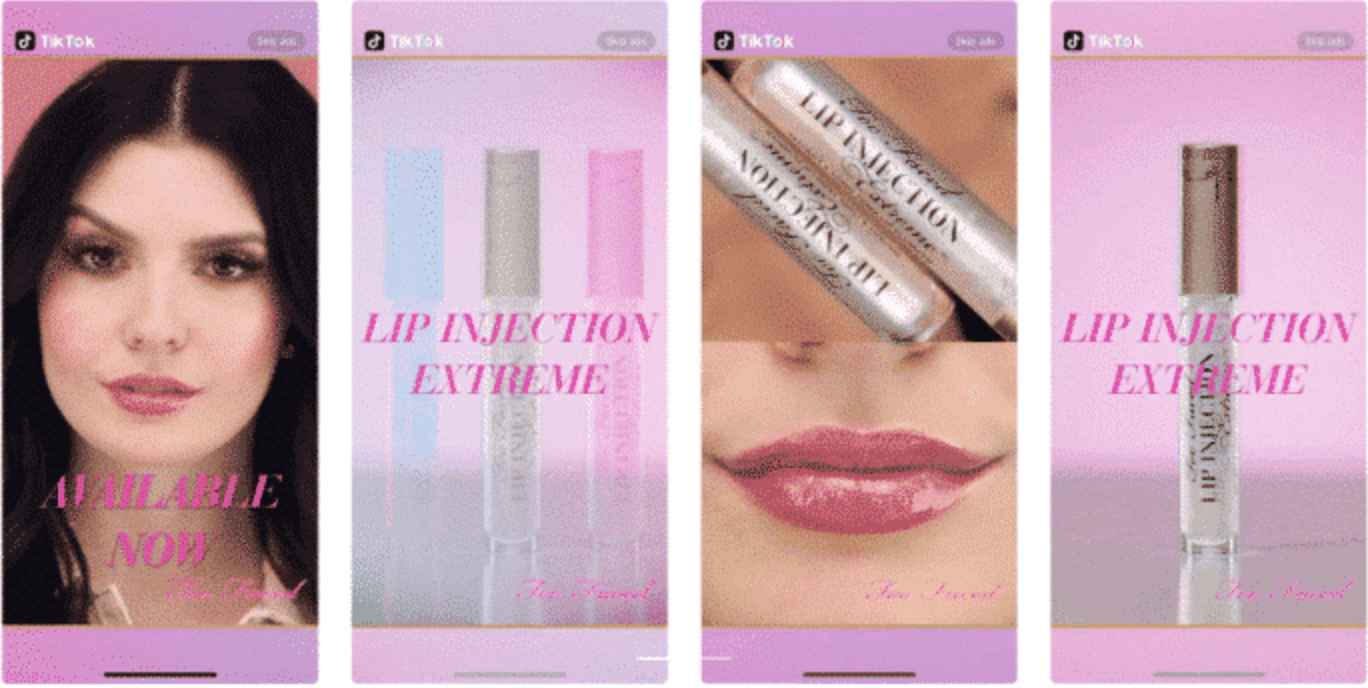 Too Faced takes full advantage of that here to advertise their cruelty-free lip plumping gloss. The ad alternates shots of people using the product with images of the product itself accompanied by benefits.

Each shot cuts quickly to keep the user’s attention and cram everything into the short ad time to maximize video views.

Here, we have Pepsi’s Australian launch campaign for Pepsi Max. Since Pepsi is launching a product in a new market, a brand takeover can help maximize attention and website traffic.

They present a high-quality image of three delicious-looking Pepsi Max flavors that takes up much of the screen.

Below is some concise copy urging readers to discover what flavors will be available, along with a prominent “Learn More” CTA.

Clean and simple but attention-grabbing content can make for a good TikTok launch campaign.

Branded effects go along well with brand hashtag challenges, as Netflix shows here with its #TribesChallenge campaign designed to promote Tribes of Europa. 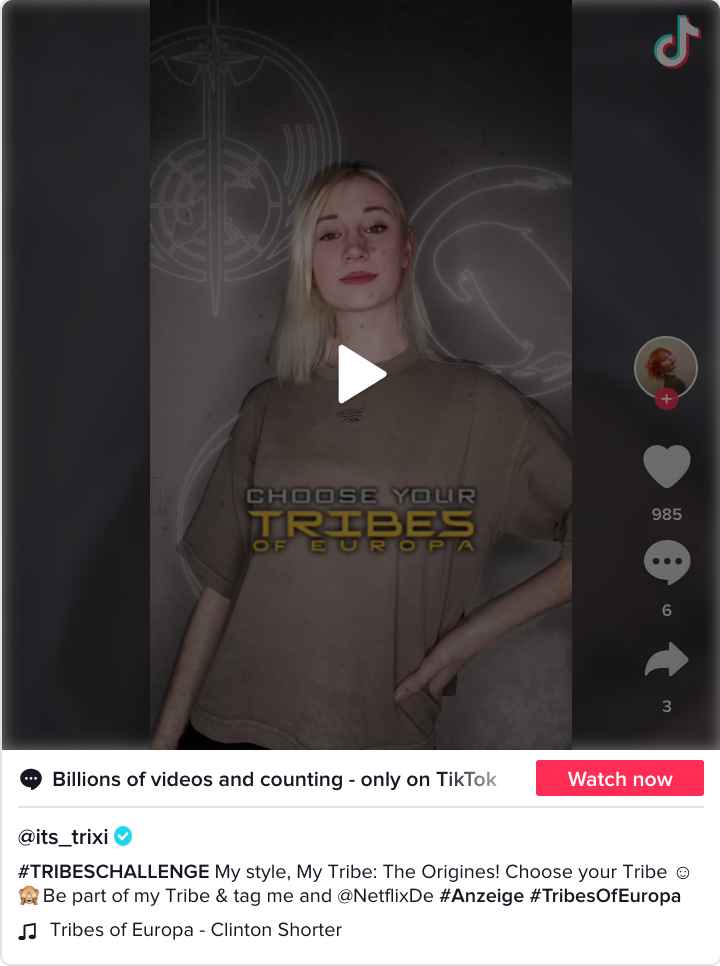 This campaign allowed users to “choose their tribe” from the show, and each tribe had special TikTok stickers and filters to add some flair.

The “choose your tribe” pulls in users by letting them identify with a certain tribe from the show — then, users put the hashtag in the post, which spreads the campaign even further.

PUMA offers another example of a branded effect accompanying a branded hashtag challenge with its Future Flash launch campaign.

This TikTok has a person decked out in PUMA future flash gear doing some tricks with a soccer ball before kicking it at the camera. Toward the end, PUMA puts a custom sticker for their Future Flash brand on the screen as the soccer player dances to some music.

It’s clean and simple, helping to spread awareness of the new product line without losing the viewer’s attention. Plus, the use of someone skilled at various soccer tricks adds a bit of social proof.

American Eagle combined hashtags with the power of influencer marketing by recruiting social media influencer Addison Rae for their #InMyAEJeans campaign. Rae launched the campaign, and it spread like wildfire from there. 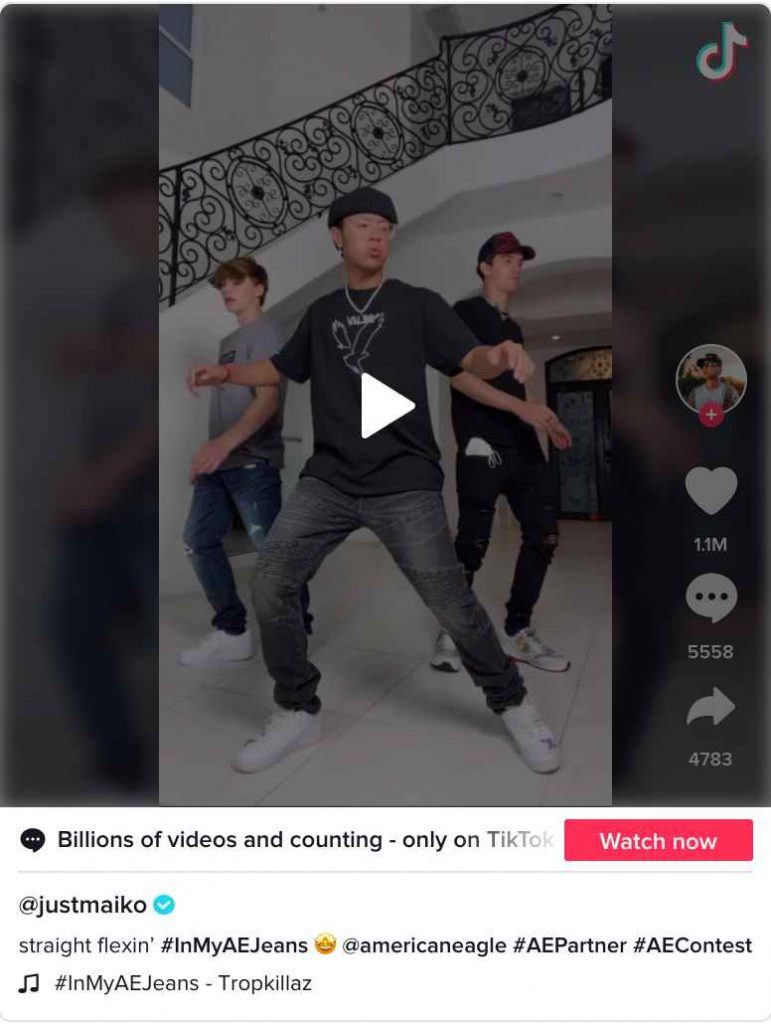 The challenge was simple enough — do a dance in your American Eagle jeans and use the #InMyAEJeans hashtag. Naturally, tons of people wanted in on the challenge to try and go viral, providing a ton of brand awareness for American Eagle as school started back up and students shopped for new clothing.

ASOS recruited several popular influencers for its #ASOSFashunWeek campaign. This campaign did two things at once. 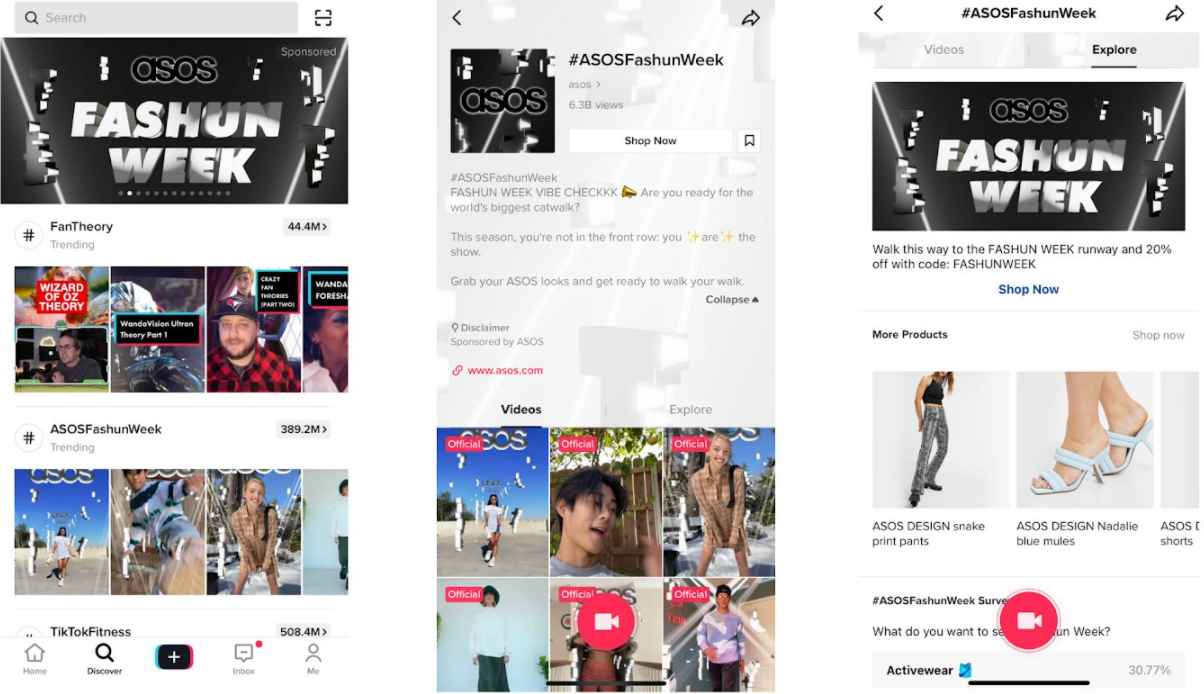 First, ASOS used Hashtag Challenge Plus. This allowed users to browse ASOS products right in the TikTok app and maximize conversion rates. What’s more is that the influencers each provided coupon codes in their posts to encourage purchases.

Beyond that, though, users were able to strut their stuff in their own ASOS outfits and use the ASOS hashtag and branded effect — spreading brand awareness.

The key to succeeding with in-feed ads is making them not look like ads.

This Lancaster University ad is a great example — in particular, its use of UGC. 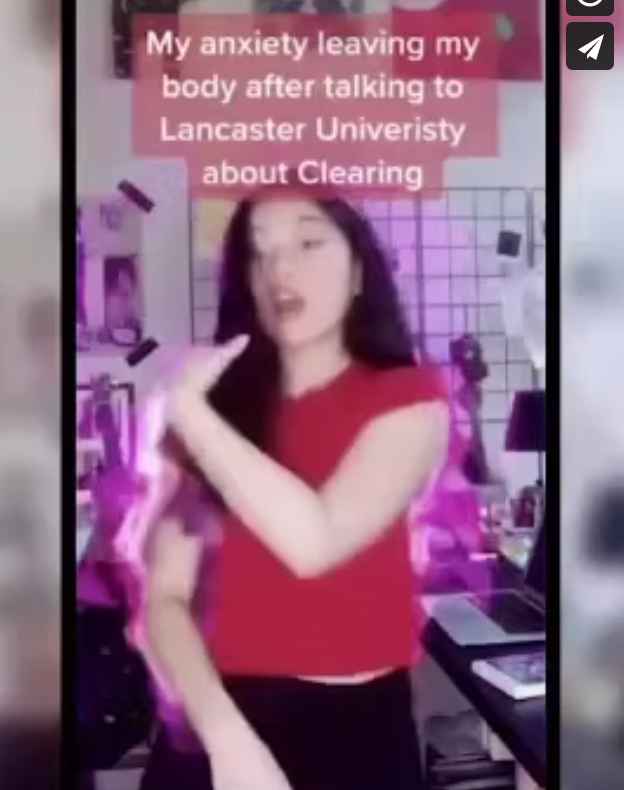 Lancaster University got a student to make a TikTok doing a dance, combining the powers of social proof, a filter, and the “dance challenge” trends that TikTok is known for.

Plus, it lasts a mere 16 seconds. This and the other elements mentioned make this ad blend in with the rest of the feed and convey the intended message without losing the user’s attention.

Millennials and Gen Z — TikTok’s largest user base — are also pretty health-conscious, according to 2019 data. 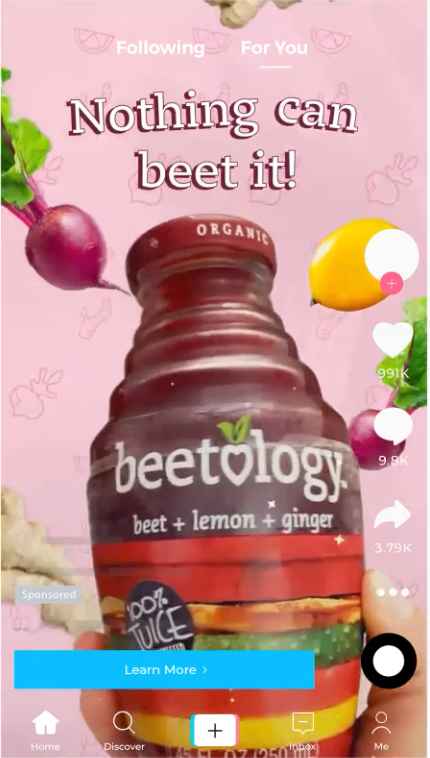 The ad features a mix of colorful shots of the product with personality-infused copy and shots of people drinking it. The latter, in particular, looked like regular customers drinking the Beetology drink, giving it a UGC feel.

The transitions are quick and eye-catching, and there’s a CTA button at the bottom for viewers to click on and shop.

TopView ads need to cut to the chase since they’re at the top of the feed. Otherwise, the user might scroll past it to see what else is on their feed.

This ad from Balenciaga does it well. It immediately shows a nice video of a Balenciaga bag before pasting the brand name on the screen. There’s no other text or unnecessary video.

Then, at the bottom of the ad is a clear CTA button users can click on to go shop for their very own Balenciaga bag.

Experian does the TopView ad well. They used their campaign that features John Cena and the purple cow that’s in many of the Experian commercials.

But they adapted it to TikTok by cutting the ad down to a few seconds. In just a few words, Cena conveys the biggest benefit of Experian Boost. Plus, the TikTok cuts to different shots quite fast, which can grab and hold the viewer’s attention.

Experian included CTA buttons to download the app on the Apple and Google Play stores. This shows that they understand TikTok users primarily use the app on mobile devices, not desktops.

TikTok’s high engagement rates make it an excellent social media channel for brands to connect with their audience — and not just Gen Z, as the data shows.

The key is to master the ad formats TikTok offers and find relevant influencers on the platform to include in those ads if possible.

Unless you’re selling an eye-catching consumer product, driving sales from TikTok can be tough.

If you want to put your brand and products in front of purchase-ready customers, Google Ads could be a better idea. The HOTH’s PPC experts can help you get started on that. Schedule a free consultation today to learn what The HOTH can do for you. 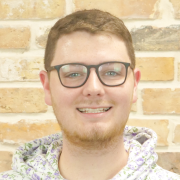 Sean is The HOTH’s Digital Content Coordinator. Sean produces the majority of our creative marketing materials and online content. He also runs and produces content for our social media channels. Recently, Sean graduated from Florida State University with a degree in Advertising and Social Entrepreneurship (Go Noles!). To book some time to chat about content creation, SEO, or SEM click here. 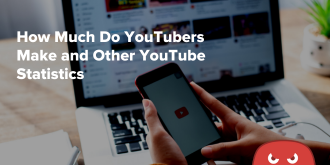 How Much Do YouTubers Make? (And Other YouTube Statistics) 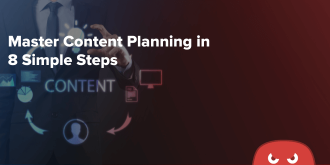 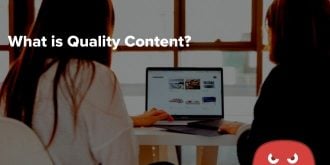