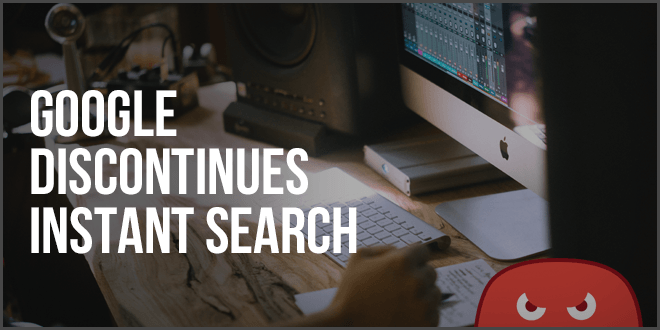 Google recently announced it’s doing away with Google Instant, which was created in 2010. Only 7 years after its inception, the search feature is proving obsolete.

But what exactly does this mean for Google users? And for the realm of search engines in general? Let’s take a look.

What Is Google Instant?

Google Instant was created under the leadership of Marissa Mayer, then vice president of search and user experience for the company, in 2010 as an easier way for users to access search results.

Google Instant automatically loaded search results and then changed them as you typed. Mayer called it “a fundamental shift in search.” Google used its auto complete feature to show predicted results in a drop-down box.

Benefits of Google Instant included faster searches, smarter predictions and instant results. It was predicted that search results would upload 3-5 seconds faster and prevent users from typing in entire queries.

So why is Google doing away with such an amazing feature?

Google Instant Is Out of Date

A feature created less than a decade ago has already proven unnecessary. Why? Because of the increase in the use of mobile devices — for virtually everything.

With more than 50% of the population using search engines on their phones vs any other device, the way in which we search has transformed.

Having a keyboard at our finger tips is super convenient, but with Google Instant it means search results overlap our workspace. Resulting in a less than user friendly experience.

The change will also prevent results from loading in real time, allowing users to view their original mobile screen in its entirety.

Google has been taking mobile very seriously in the last few years, with updates like mobilgeddon, the mobile popup update, the index divide and more.

With the move away from Google Instant, the company can now focus on making searches more fluid and timely on all devices.

What Does the Future Hold?

With Google implementing new updates constantly, it’s no surprise the search engine giant is making other changes to keep ahead of the times.